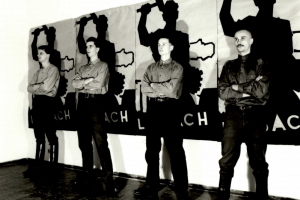 Lecture
Location: Museum of Contemporary Art Metelkova, +MSUM
Darko Štrajn: “How is Adaptation of the Visual, Audible and of Performativity Subversive?”

This lecture is based on the chapter ‘Laibach’s Subversive Adaptations’ in the book The Politics of Adaptation: Media Convergence and Ideology (Dan Hassler-Forest & Pascal Nicklas (eds.), Palgrave Macmillan, spring 2015).

When Laibach first appeared in the early 1980s, we talked about many aspects of the group’s subversiveness, but now we can ask ourselves how this can be read today, and ascertain to what extent it has exhausted itself, been transformed, or perhaps been preserved. In whatever way the whole Neue Slowenische Kunst project might be represented by music, performance art, visual art, mass-media works and other products – and not least in the reactions of the audiences, in their attitudes, clothes, gestures and so on – there can be no doubt that multiple forms of adaptations within performance and other forms of presentation are the key components of the NSK phenomenon. The work of NSK as a whole presents itself as an intervening force of artistic adaptations. This occurred within an array of genres (visual, musical, and theatrical), since subversive adaptations of mixed artistic and political meanings are invested in a field that generates the cultural continuity of the bourgeois world, as well as both manifest and latent totalitarianism. NSK’s language, music, visual communications, and so on, become understandable in their social-cultural dimension, as recognized in the broader context of the aesthetic phenomena of post-modernism. NSK’s work adapted images, music and gestures from different periods, narratives and spaces in a manner which exposed the prospect of social change succumbing to the logic of domination. Therefore, for instance, their syntheses of classical avant-garde and totalitarian images should be read in their semantically dialectical composition. The entire NSK project thus ironically succeeded in delivering its intended message. There can, of course, be no doubt that this message had certain aesthetic effects, but ultimately these can be defined only when we take into account the political, social and cultural confrontations which NSK’s subversive adaptations created in Slovenia, as well as globally. Laibach and NSK appeared at a time that was indicating, as it were, the promise of an event (as defined by Alain Badiou), which Laibach and other actors in the NSK network were deconstructing well before the non-event, the pathetic change termed ‘the Death of Communism,’ actually arrived.

Darko Štrajn, professor of philosophy, is a researcher in the educational sciences programme at the Educational Research Institute, and he lectures on film and media studies at the graduate school of the Institute for Studies in Humanities in Ljubljana.