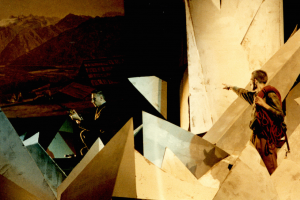 Screening of the film and a conversation with director Igor Zupe about “Heimat film” and the production book for From the Mouths of Animals, 1984

The Film department, led by Igor Zupe, then a student of film directing, focussed largely on the phenomenon of the Heimat film in all its ideological dimensions. The key creations of this section were From the Mouths of Animals, the production book for a Heimat film by Miran Mohar and Andrej Savski (1984), a retrogarde retelling of the story of the nation through familiar NSK symbols such as the black cross, the stag antlers, the hunter, the hero, Mount Triglav etc., and Beauty and the Nation, a 1985 Heimat film about Slovenian composer Marij Kogoj. The latter was directed by Igor Zupe and produced by the Academy of Theatre, Radio, Film and Television (AGRFT) of the University of Ljubljana, and used the narratives of three key characters – the intellectuals Bratko Kreft, Taras Kermauner and Josip Vidmar – to explore the typical fate of the Slovenian avant-garde artist, torn between creative frenzy and existential anguish. Bratko Kreft spoke about the opening night of Marij Kogoj’s opera Črne maske [Black Masks], Taras Kermauner recounted the existential anguish experienced by Kogoj on the streets of Ljubljana, and Josip Vidmar described the story of Kogoj’s failed attempts to establish himself on the international music scene. These testimonial scenes were linked together by shots of a Cubist Triglav, onto which short excerpts from Mako Sajko’s short documentary on stag fighting, Tourney at the Šumik Waterfall, were projected. This was a transposition of the last scene from the production book for the Heimat film From the Mouths of Animals, which was never produced and which would have ended in retrogarde fashion, with an intervention by Laibach at the north face of Mount Triglav: the members of the group were supposed to hang a suprematist cross on the Aljaž Tower, thus re-baptising it.

Along with Laibach tracks, the film was accompanied by music by Marij Kogoj, performed for the occasion by composer Jakob Jež and singer Olga Jež, while the visuals included paintings by the IRWIN group as well as a portrait of Marij Kogoj by Veno Pilon; the set was designed by Miran Mohar.

More about the NSK from Kapital to Capital on MG+MSUM home page.

On Thursdays MG+MSUM are opened till 8 p.m..

The exhibition is a part of a five year programme The Uses of Art – Legacy of 1848 and 1989 led bz L’Internationale confederation of museums. Supported by Ministry of Culture of the Republic of Slovenia, European Union’s Culture Programme and Foundation for Arts Initiatives. The publication accompaning the exhibition is supported by Kontakt, Erste Group Collection and ERSTE Foundation, published and distributed by MIT Press.