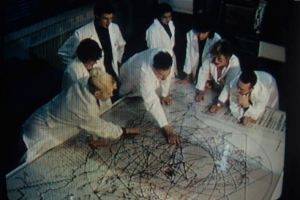 The painting and design groups of NSK, i.e. IRWIN and New Collectivism, developed the concept of amalgamating Slovenian traditional iconic paintings and architectural works (e.g. of Slovenian impressionists and the architect Jože Plečnik) with masterpieces of the international historical avant-garde, especially Malevich’s Suprematism (for example, his black cross became the symbol of NSK). These two groups often juxtaposed the most bizarre Nazi, Slovenian, Alpine, hunting or folksy motifs with sophisticated contemporary design solutions and techniques. The historical and well-known thus intertwined enigmatically and unexpectedly effectively in massively framed paintings or monumental posters.

While the NSK group of architects, Builders, did not attract as much attention as the other groups, it was nonetheless not without significance for the development of architectural thought in Slovenia in the 1990s. Quite clearly not intended for realization, their designs made evident their interest in Russian revolutionary architecture and urban planning based on strictly aligned, gigantic apartment buildings. The Builders’ ideas were in stark contrast to the attractive, postmodernist designs of the time, focused on human proportions, rounded forms, and traditional building materials, such as visible brickwork and wood. Around 1990, a subdivision for architecture and film evolved from Builders, called Manufacture. Like Builders, the Manufacture designers quoted the views and works of pioneers of 20th century industrial design. It was thus not unusual for them to juxtapose Le Corbusier and Mies van der Rohe with typical Plečnik craftwork. While there are aesthetic and ideological differences among such designers, they all belong to the spirit of modernism. The most typical aspect of the third Slovene avant-garde (retrogarde) is thus this nonchalant quoting by taking examples from numerous, seemingly disparate sources, thus interconnecting and equating them.