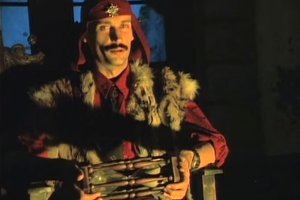 Screening of documentary films and music video clips about Laibach and conversation with director Peter Vezjak on Wednesday 10 June at 6 p.m. in Moderna galerija Auditorium.

The event started with a projection of a documentary video film BRAVO: Laibach in Film (1993), showing Laibach on tour with staged clips, clips from video spots, and theoretic analysis by philosopher Slavoj Žižek and critic Chris Bohn. The projection was followed by a commentary of the director Peter Vezjak.

The projection of the film was followed by two short video spots of Laibach directed by Vezjak: Sympathy for the Devil (1988) and Wirtschaft ist Tot (1990).

More about the exhibition at the following link: NSK from Kapital to Capital.

The exhibition is a part of a five year programme The Uses of Art – Legacy of 1848 and 1989 led bz L’Internationale confederation of museums. Supported by Ministry of Culture of the Republic of Slovenia, European Union’s Culture Programme and Foundation for Arts Initiatives. The publication accompaning the exhibition is supported by Kontakt, Erste Group Collection and ERSTE Foundation, published and distributed by MIT Press. 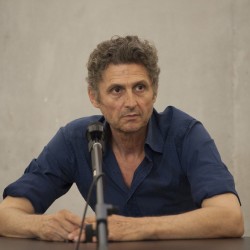