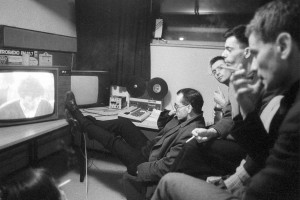 A Slovenian premiere of the documentary about the “poster scandal” and a conversation with the film’s authors Corinne Enquist and Toma Bačić, Jožef Školč and members of New Collectivism; moderator: Blaž Vurnik

On 28 February 1987 the Belgrade daily Politika published an article under the heading “Podvala na plakatu” (Poster Scam), revealing the original artwork on which the 1987 Youth Day poster had been modeled. The poster had been submitted by Studio Novi kolektivizem (Studio NK) and selected by a jury, along with the design of a baton, to serve as the visual identity for the Youth Relay. That year it was the turn of the League of Socialist Youth of Slovenia to organize the rather stale and problematic all-Yugoslavian event. The poster’s retrogarde remaking of a totalitarian image into one of brotherhood and unity became widely known when it was discovered that Studio NK had borrowed the motif from Richard Klein, a 1930s German artist, with the original work produced as part of the Nazi propaganda machine. Thus began what became known as “the poster scandal”, and over the following days and weeks this became one of the hottest topics of discussion all over Yugoslavia.

As a result, the Public Prosecutor’s Office received an indictment from the Internal Affairs Administration against the members of Studio NK for insulting the Socialist Federal Republic of Yugoslavia. However, while the poster scandal created considerable debate, the media and others seemed to lose interest after little more than a month. Moreover, less than a year later the Ljubljana Public Prosecutor’s Office dropped the charges against the designers of the poster, on the grounds that it represented a legitimate form of artistic expression.

Although the poster scandal did not shatter the foundations of socialist self-management and the brotherhood and unity of the Yugoslavian Federation, it did make a few cracks in them. The scandal took place at a time that was often fraught with conflict between Slovenia and the Federation, between the League of Socialist Youth of Slovenia and other sociopolitical organizations, and between representatives of the emerging civil society and the authorities.

The film The Fine Art of Mirroring was shown for the first time in Zagreb in March 2015. The authors are Corinne Enquist and Toma Bačić.

Corinne Enquist was born in Zagreb, where she graduated with a degree in English and French. In 2000 she obtained her MA in New York in art history and art marketing at Christie’s. She has organized several major and well-received exhibitions in Zagreb, such as Zatvoreni svjetovi, Williamsburg, New York (Closed Worlds, Williamsburg, New York), about a present-day art colony in New York, and Bunny Revisited, an exhibition of Eduardo Kac. She served as the coordinator of content for the English version of culturenet.hr for several years. She co-wrote and co-developed the script for the film The Fine Art of Mirroring, produced by D’Art from Zagreb, which was shown at the IDFA Amsterdam 2013. She was the co-writer and director of the projects Turbo Classico and Križ, rat i mir, also produced by D’Art.

Toma Bačić was born in 1976. He graduated in comparative literature and art history from the Faculty of Arts in Zagreb. He worked for the HTV program Transfer (about contemporary culture and art) as director and writer, journalist and critic. He has written numerous reviews for magazines like Zarez and international trainspotting publications. In addition to television reports (on topics such as Sepultura and heavy metal under totalitarianism; Disco FV, Sonic Youth, alternative music and art in the 1980s), he co-wrote and co-developed the script for the film The Fine Art of Mirroring, produced by D’Art from Zagreb, which was shown at the IDFA Amsterdam 2013. He was the co-writer and producer of the projects Turbo Classico and Križ, rat i mir, also produced by D’Art.

Blaž Vurnik is a historian and curator at the City Museum Ljubljana. In 2005 he published the book Med Marxom in punkom – vloga Zveze socialistične mladine Slovenije pri demokratizaciji Slovenije (1982-1990), in which he uses archival sources to discuss the poster scandal and its place in the political developments of the late 1980s. In 2013 he received his PhD from the Department of History of the University of Ljubljana with a dissertation entitled Konfliktna razmerja v SFR Jugoslaviji z vidika političnih odnosov (1974-1990). He is the co-author of the exhibition Slovenian History at Ljubljana Castle, and author of several permanent and temporary exhibitions at the Ljubljana City Museum and Galleries. His areas of research include interpretations of industrial heritage and the history of childhood during the Second World War. His latest publication is a comic-strip co-authored with Zoran Smiljanić, Spomini in sanje Kristine B. Ljubljana 1941-1945. 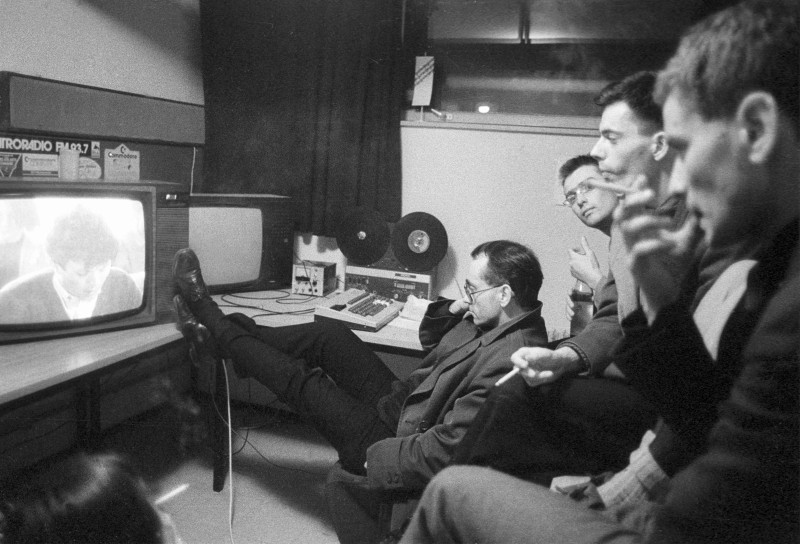 Hearing the verdict, 1987
photo by Tone Stojko, in the archives of the Slovenian Museum of Contemporary History 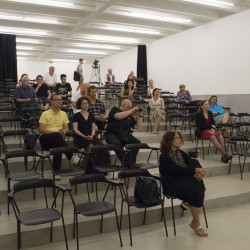 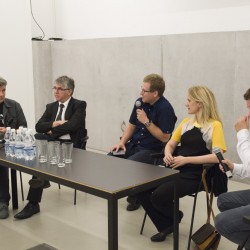 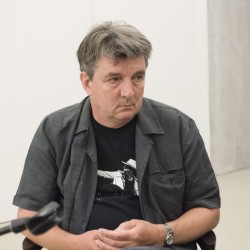 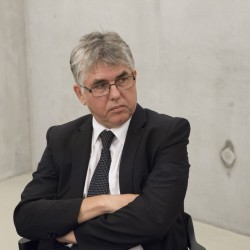 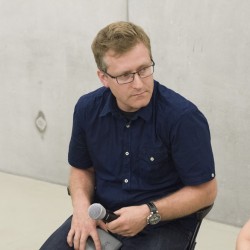 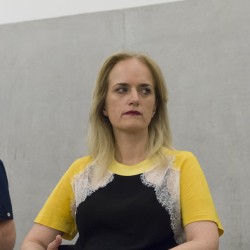 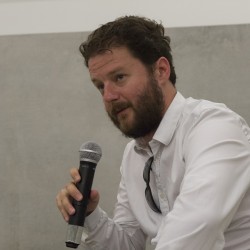 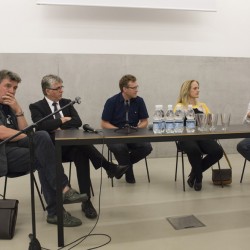