The group Laibach was formed on 1 June 1980 in the industrial town of Trbovlje. It works as a collective, on the quadruple anonymous principle of membership EBER-SALIGER-KELLER-DACHAUER (pseudonyms), which conceals in itself an arbitrary number of sub-objects. In its work, Laibach employs the retro-avant-garde method. 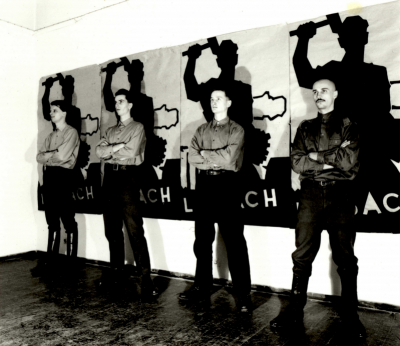 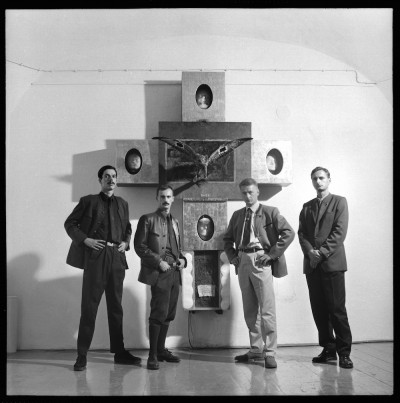 An exhibition at the Equrna Gallery, Ljubljana, 1990, photo by Franci Virant

The group Laibach was formed on 1 June 1980 in the industrial town of Trbovlje. Laibach works as a team (collective spirit) according to the principle of industrial production and totalitarianism, which means that the individual does not speak; the organization does. The flexible and anonymous membership works on the quadruple principle (Eber – Saliger – Keller – Dachauer), which – predestined – conceals in itself an arbitrary number of sub-objects.

Soon after its foundation, Laibach declared that its name was a materialised idea on the level of an enigmatic cognitive symbol. The name Laibach first appeared in 1144 as the original name of Ljubljana, then again in the era of the Austrian-Hungarian monarchy, and finally in 1943, at the time of the German occupation of the Slovenian capital. The controversy around the name and the group’s provocation reached its peak in 1983, when the presidency of the Ljubljana City Committee of the Socialist Alliance of Working People of Yugoslavia banned all public manifestations of the group under this name. The first legal concert in Ljubljana after the ban was lifted only took place in 1987.

Besides the name, the key Laibach motif is the cross, which is charged with performative power. The Laibach cross is an independent symbol integrating a number of artistic, totalitarian and religious references: from the cross of Kazimir Malevich, to the Greek cross and the black cross that German military vehicles and aircraft bore during World War II. The black Laibach cross, featured on posters, fanzines, paintings, the sleeves of its members’ uniforms, flags, at concerts and on album covers, is not intended for any sort of social identification, but is instead a sign to arouse social fascination. Laibach also shocked with its use of Nazi iconography, treating it as a taboo topic that had to be brought to awareness and connected to the totalitarian impulses within the socialist society.

In its artistic productions Laibach brings together a variety of artistic practices, following the concept of a Gesamtkunstwerk (total work of art) and producing a wealth of self-designations in the process. To this end, Laibach Kunst refers to the group’s artistic principle, which is most evident in exhibitions, but covers the whole of its work. Laibach’s approach to art and the social and political reality is retro-avant-garde. The material for its work is taken from various locations and times, copied and montaged, while sometimes it intervenes directly into existing models. Through its motifs, militarist image, and manifestos quoting various seem

ingly incompatible sources, from political speeches to hunting club regulations, Laibach explores the relationship between art and ideology. On the one hand, its industrial aesthetics serve to emphasise the group’s origin, referring to the working-class and revolutionary traditions of the Red District and of Trbovlje. On the other, Laibach returns to the industrial era in order to use its almost archaic iconography to deconstruct the post-industrial nature of both socialism and capitalism, as well as that of the cultural industry. Laibach’s heavy, booming industrial music draws on a number of sources, from Bach and Wagner to more contemporary classical music by Holst and Penderecki, and from Kraftwerk’s electronic music to pop.

Laibach has consistently collaborated with other NSK groups. One of the most important of these collaborations is certainly the soundtrack album Baptism under Triglav, created for the production of the same name by Scipion Nasice Sisters Theatre. 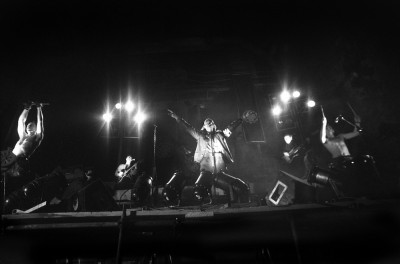 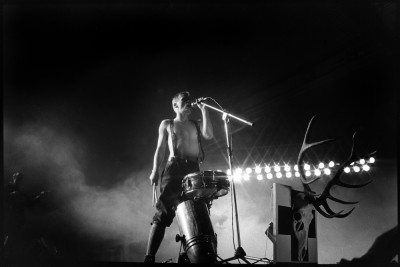 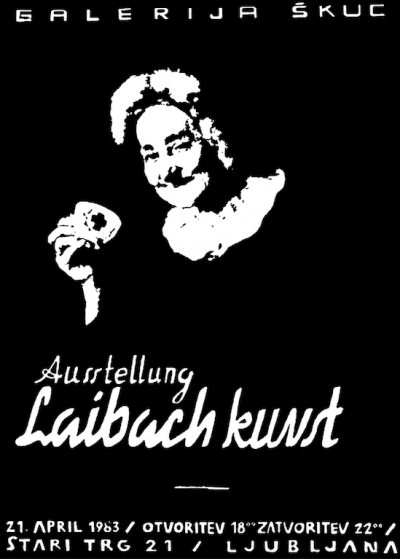 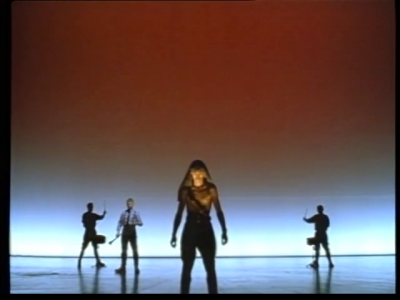